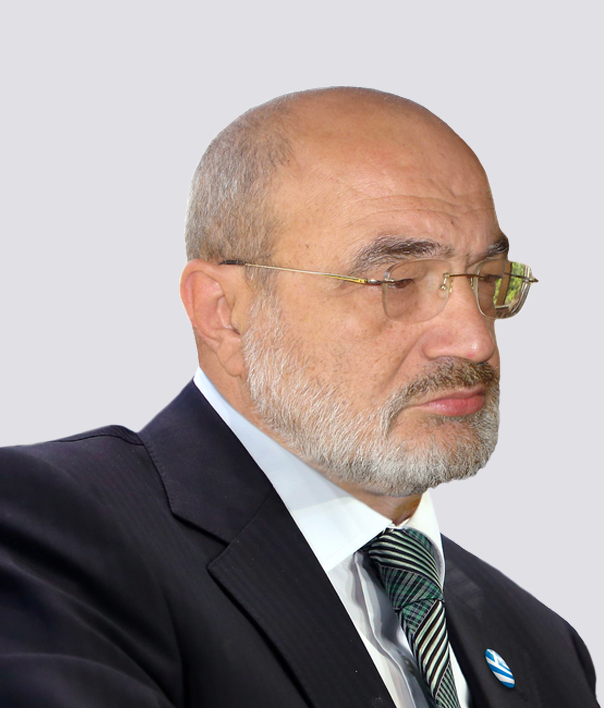 Born in the village of Mandalo in the prefecture of Pella, in 1954. Father of three children (two boys, one girl). On his mother’s side, he comes from Argos of the West Pontus, home of the Chief of the Pontian Revolution leader, Kotza-Anastas.

From his father’s side, he has two origins:

A. His grandfather’s side, from the Greeks (Grico) of Great Greece (Magna Grecia, southern Italy and Sicily), who were found there in the early 17th century, from Mani, after its recapture by the Turks. The distant origin of the Zoi surname (Vitali, as they were renamed in Griko), is from Constantinople, a family that participated in the administration of Despotato of Morea.

B: On the part of his grandmother from Roumeli, namely from Amygdalia (Plessa) Dorida, from the family of Mahades. A family that has a long history of resistance, both against Turks during the Revolution of 1821 and the National Resistance against Nazis.

He worked right after the military dictatorship in Greece until 1986, as a journalist, editor, editor-in-chief, and director, in printed and electronic Media.

1984, editor-in-chief of the newspaper «TodayNews».

1984, correspondend of the newspaper «Eleftherotypia» in international reporting. Pre production editor in the production of TV productions of state television of Greece ET1.

1993, Director of the Local Goverment Radio Station of Pella (Local Union of Municipalities and Communities).

2006, producer of a television show for farmers, on TV channel «TeleAsty».

2005, «Return to Ithaca», on behalf of the «Black Sea Center» of the Prefecture of Thessaloniki, on the Greek villages of Tsalka Georgia.

2005, «Agion Oros, The Garden of Holly Mother», a 4 hours documentary on the 20 Monasteries of Mount Athos.

1973, is injured and arrested in the events of the Polytechnic School of Athens.

1974, as an air force serviceman, presents himself to the Commander of 112th Fighting Squadron and requests to be sent as a volunteer to Cyprus. His Commander denies the request.

1975 – 1979, participates in actions of the extra-parliamentary left and writes as editor in various small and large news publication. He is active in the major mobilizations of this period.

1976, participates in the Polisario Front for the Liberation of the Western Sahara. He organizes dispatch of medicines to Sahrawi.

1981, in El Salvador, he participates in the People’s Front FMLN (Farabunto Marti Liberacion Nacional) against the dictator Napoleon Douarte.

1982, leads the Manhattan Food Vendors Association from the position of Executive Secretary of the Association of Manhattan Food Vendors. By his involvement in this case, an entire police station at the Manhattan Police Station (N.Y.P.D, 17th Precinct) was «extinguished» for corruption. (Related reference in N.Y. Times). At the same time, he presents an appeal before the New York Supreme Court, for an unconstitutional «non-equal treatment» of Greek retail outlets that are being intimidated and illegaly fined, by the New York Police Department.

1983, he is awarded by the New York City Municipal Authority for his social contribution to the Greek American Community. (April 9, 1983).

1986, he is permanently assigned to the Ejercito de Luce Irregular (Special Forces of the Peoples Army of Nicaragua). He participates in the International Brigade (Brigada Internationalista), at the FSLN Militia, and works as an unpaid volunteer in Cooperativas (People’s Agricultural Cooperatives).

1987, he returns to his place of origin of Mandalon N. Pellas, after he finally leaves his professional journalistic career, from the «main stream» media and the Athenian press.

1989, participates in the Unified Left Coalition, as a member of the three-member Secretariat of the Prefecture of Pella. He resigns after many months of trying to unite progressive forces.

1990, he is elected Member of Council of the Mandalon Community and its Vice President. By his initiative in front of the State Legal Council, seizures by private individuals of the properties of the local Organizations (Municipalities and Communities), which were in force until then, have been unblocked.

1991, as President of the Pontian Society of Cultural Community, organizes a visit to Pontos (Argos Neokesareia), from where he brings soil and water to be scattered on the tombs of Pontian refugees.

1993, visits Serbia as a member of a humanitarian mission, together with Mayors of the Prefecture of Pella. Immediately after completing the mission, he returns to Serbia again, organizing the Patriotic Organization «Rigas Fereos», based in Sarajevo. He is co-ordinating struggles against the NATO forces, while at the same time leading the organization of the Greek Volunteer Guard, as part of the Republika Srpska Army, based in Vlasenitsa, Serbia.

1995, he is appointed Special Adviser to the Presidency of the Republica Srpska in agreement with the Greek state and political authorities and he is appointed as a Liaison between Greece and the Serbian Republic at a highest level. Within this capacity, he holds successive meetings, with the political and state leadership of Greece and Serbia, on issues concerning the two countries.

1995, he is awarded the rank of Special Forces Major of the Republica Srpska Army in Award as being the Head of the Hellenic Voluntary Guard. This position, upon his request to the General Staff, is unpaid and without any financial gain.

1995, he participates, together with Serbian Governor of Srpsko Sarajevo and later Serbian President Mirko Sarovic, in negotiations with UNPROFOR (United Nations Force) with representatives of the NATO forces and French General Morillon in direct consultation with the President of France Chirac, for the implementation of the Dayton Treaty and the surrender of the Serbian section of the city of Sarajevo, to the NATO forces. He is differentiates himself by Milosevics line and refuses to agree to the surrender of the Serb district of Grbavica to the Bosnian-Croat Federation. As a central speaker in the great assembly of Serbian Sarajevo residents, he urges them to resist by any means possible.

1996, immediately after Imia crisis in Greece and the ongoing conflict between Greece and Turkey, in a formal meeting with the Greek National Defense Staff, as the Diplomatic Liaison of the two countries, submits a proposal by the Serbian Republic and Serbian Army General Staff to deploy a Brigade of Serbian Volunteers, consisting of officers, and special forces soldiers, alongside the Greek Army. The political leadership of the Greek Ministry of Defence, does not accept the proposal.

In the same year, (12/6/1995) he is retired with the rank of Lieutenant Colonel, refusing to accept the proposal of the Army Headquarters of the Republic of Srpska, to be appointed as a regular officer, with the rank of Colonel, following a relevant Higher Military School, as he did not wish to serve on regular terms in any military body other than that of the Greek Volunteers.

1997, as a diplomatic link between the two countries, Greece and Serbia, mediates the development of Greek enterprises in Serbian Republic.

1998, he is appointed Consul General of Bosnia and Herzegovina in Thessaloniki, on a proposal by the President of the Republic of Srpska, Mirko Sarovic. He does not accept his appointment, as this entails the lifting of his Greek citizenship.

1999, he participates in the organization of air defense in Belgrade, organizing with others experienced Bosnian Serb Officers, the moral, material and technical support of the citizens of the Serbian capital Belgrade in shelters and in the mobilizations in open spaces during the NATO bombing.

In the same year (01.08.1999) he is awarded by the President of Republika Srpska, the highest medal of the Serbian Nation, the Grand Cross First Class, while he awarded as Major General of the Serbian Army.

Also in the same year, (March 1999), organizes in Thessaloniki a new Corps of Greek Volunteer Fighters, consisting of 250 Greek officers, non-commissioned officers, retired army officers and reservists,  based in the offices of the PAOK (Thesalonikis Football Team) Stadium.

2000, he is touring the Central Macedonian valley, organizing the farmers of Central Macedonia, into a united union (Pellas-Imathias Syndicate, Marinos Antypas). He is facing widespread corruption, mainly related to the illegal misappropriation of State and EU agricultural funds, by the organized left and right political party interests. He is persistently and repeatedly persecuted by both the state authorities and the Hellenic Canning Factory Owners Association.

2001, he participates along with the late Giannis Patakis in the Panagricultural Association (PASY) and is elected a member of its secretariat. After many months of organizational and trade union action, he leaves his post in the Secretariat, refusing the converting of PASY into a KKE (Communist Party of Greece) party organ.

2002 at prefectural elections in Pella and Imathia, leads to the establishment of two clearly agricultural ballots,  urging Central Macedonia rural populations to understand, the destruction of the primary production by the left and right political party system, together with the plan of their destruction, by GATT, CAP, AGENDA 2000.

2003, with his letter of 24 March 2003 to the Iraqi Government, through the Iraqi Embassy in Athens, sets the Organization of Greek Volunteer Fighters, at the disposal of the Iraqi People, against the US invasion of Iraq. At the same time, he organizes a dispatch of pharmaceutical material to the Iraqi People.

That same year, with no. 63/2003 decision of the Court of Edessa, organizes the association of Greeks Coffee Shop and Restaurant Owners of border villages, towns and cities against the invasion of «private copyright corporations» whose COs, in an excessive and organized charges and lawsuits barrage, destroy the micro-provinces of the poor periphery, leading them to close down their stores. He holds great mobilizations and meetings with the competent Ministers in Athens and Thessaloniki. The action of the Association continues until today, towards the private «copyright protection» companies, AEPI, ERATO, APOLLON, GRAMMY.

2004, January, meets with EU Agriculture Commissioner in Brussels as Head of the Agricultural Cooperatives Presidents Delegation of Pella and Imathia and presents an in many pages and documented report the theft of EU funds with thousands of fake signatures from political party agents of Pella and Imathia. Assistant Commissioner Kummer is clearly responding to him that the European Commission is aware of the abuses of EU resources but does not want and can do nothing.

2005, refuses to pay the legal costs (230 euros) in a conviction for his trade union action as President of the Union of Farmers of the two Prefectures of Central Macedonia, by the Court of Appeal of Thessaloniki, following a complaint by the Canners Association of Greece. He is imprisoned in the Diavata prison. He declares himself a «political prisoner» and refuses to receive the scheduled daily financial compensation. In his trial, class martyrs along with the Industrialists, were top agro-cooperative executives of PASOK and ND, of the Prefectures of Pella and Imathia.

2006, tours the Greek rural regions from one end of Greece to the other, explaining to Greek farmers his proposal for the removal of the intermediaries from the primary production, with a creation of an Auction Center for Agricultural Products. A long-term effort, which has failed, given the full reaction  of intermediaries, and the corrupted left and right political party system.

The decade 2000-2010 in parallel with other activities, participates in all endeavors constitution patriotic political area and even from executive positions, Political Spring (parliamentary candidate), LAOS (Section manager on rural Greece), Democratic Revival (spokesman). He quits from all the above mentioned political parties after many years of participation and action, completely disappointed by the «professional patriots» politicians.

2009, same year, he organizes the movement against private roads tolls on National Highways.

June 2009, establishes the Patriotic Front of Greece. A Direct Democracy Political Party, officially recognized by the Supreme Court of Greece and the Hellenic Parliament.

2011, Patriotic Front of Greece is leading the protests of the Athens Constitution Square against the memorandums, by organizing the «Alliance for Greece».

2012, organizes the Solidarity Movement «Allilegion», aiming at the promotion of non-mutant Greek agricultural products. A central shop in Athens and two branches in Palini Athens and Aigio are being created, as well as a factory of organic flour.

2013, participates in the People’s Eurasian Union, a Vladimir Putins initiative, and has regular and permanent contacts with executives of the government of the Russian Federation.